Probably it's Prophecy by Jacob Peppers 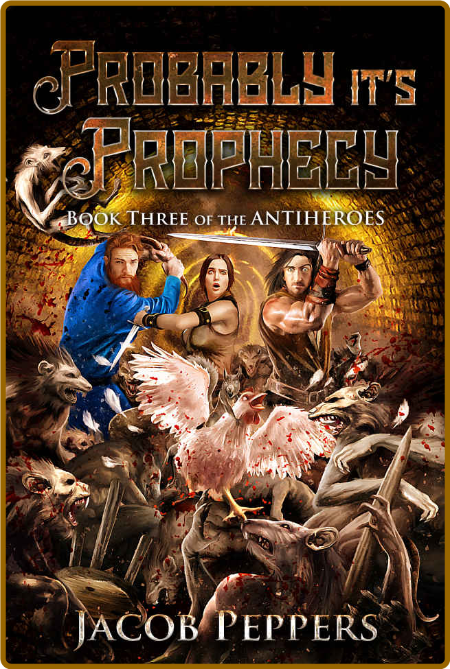 The only thing rarer than a homicidal chicken is a hero who lives to see retirement.

Dannen Ateran spent the week following his battle with the necromancer and his undead army doing exactly what he enjoyed most—nothing.

Certainly nothing heroic. At least nothing more heroic than lying in Claire's bed and reveling in the feeling—depressingly unfamiliar—of having no one try to kill him.

At least, that was, until Perandius summoned him to the land of the gods once more with a mission to rescue a shepherd boy foretold of in prophecy.

Dannen didn't care for shepherd boys—the fools never could seem to stay out of trouble—and he cared even less for prophecies. But considering that the messenger god confiscated the Divining Stone—which Dannen had given to Claire as a necklace and which she loved, likely more than him—he decided it might be best to leave Talinseh for a time.

And so Dannen, hoping to keep breathing a bit longer, sets off to the south with his companions. But that was the thing about fleeing from death—no matter how fast a man runs, it's always ahead of him.

And that death, this time, might well come in the form of wererats, plague-ridden beasts infesting the sewers of a port city or, perhaps, in an ancient sea monster and, if all else fails, there's always the group of assassins hunting them.

Plenty of ways to die and die horribly but then, Dannen had lived long enough to know that if a man went looking for ways to die, he never had to look very far.

Probably it's Prophecy is the third installment in the humorous, action-packed epic fantasy series, The Antiheroes. It is a story of magic and magical beasts, of assassins and blades in the dark, of monsters out of myth and men out of their minds. And one unfortunate, reluctant hero, known as the Bloody Butcher, who is only trying to survive it all.