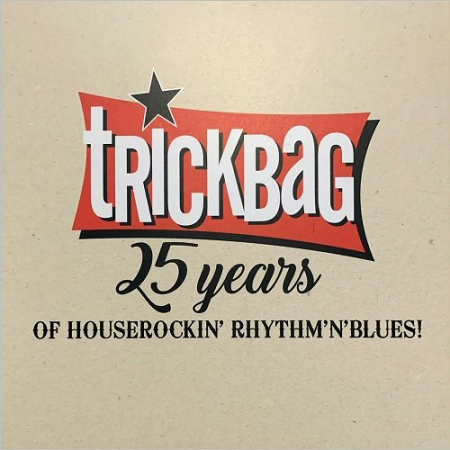 Trickbag's newest album's title 25 Years of Houserockin' Rhythm'? N' Blues!? might lead some fans to think that this is some kind of career retrospective, compilation or a re-hashing of older material. It isn't. It is all brand new, original material which is a celebration of what makes this Stockholm, Sweden, based ensemble of international musicians so good.

Maybe a little trickbag history is in order here. 25 years have passed since vocalist Tommy Moberg began playing under the name trickbag. The band name came by way of New Orleans rhythm & blues pioneer Earl King and his song of the same name. Many personnel changes have taken place and as Tommy Moberg states in this album's liner notes, ".the list is too long to mention but the recruiting of double bass player Lars Näsman turned out to be a milestone in the band's history." Joining trickbag in the late 90's and playing on the band's second album, Afternoon Mint, Näsman, along with Moberg became the driving force and creative backbone of trickbag.

Now twenty years down the road from that sal second album, trickbag has just released their 8th album. Here they seamlessly mix blues, rhythm & blues and first-generation rock & roll into a cocktail that is irresistibly fun. One of the entertaining parts of this band is that it is a true ensemble in every sense of that word. The detailed songwriting credits reveal a true collaborative effort.

Of course, any album is only as good as the material and these twelve songs are simply outstanding. From songs that evoke a Gulf Coast R&B sensibility like Come Get It and Ida-Lee to 60's style garage rockers such as Rimshot and Kakaddoo and nearly everything in between, 25 Years. has it all. A personal favorite is Highways 1. It is an homage to my home state where trickbag has been warmly embraced on their visits here.

Trickbag is of course Moberg and Näsman. They are joined by fellow Swedes Fredrick von Werder on piano and organ and Johnan Swensson on drums. Additionally, harp man extraordinaire, and a star in his own right, Steve "West" Weston, has for several years now been a permanent member of the ensemble. His solo album West Street was the BLUES JUNCTION Productions Blues Album of the Year in 2018. That album included Finnish guitarist Tomi Leino. Like Weston, this Helsinki based musician also has been a member of trickbag for many years. He also has a very active solo career with his very accomplished Tomi Leino Trio. His guitar playing can be heard on numerous recordings from musicians all over the world. His authoritative attack on his instrument is a big part of what gives trickbag their distinctive bravado and makes 25 Years of Houserockin' Rhythm'? N' Blues!? so thoroughly enjoyable.

In the blues rich part of the planet known as Scandinavia, trickbag has emerged as heavyweight champions. 25 Years of Houserockin' Rhythm'? N' Blues!? is the knockout punch that proves this point. This album receives my highest recommendation and is a very serious candidate for the 2019 BLUES JUNCTION Productions Album of the Year. ~David Mac